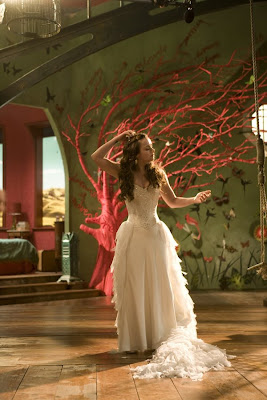 just one sleep until i head out for cha in chicago tommorow morning, yay! pray that my travel is easier than it was for last years summer show, haha. i can't wait to hang with kristina, vee and the sis ladies, not to mention all the yummy new product to drool over, plan classes around and order! eep! can't wait! catch you on the flipside (mmm.... must watch boondock saints soon!)

oh, and speaking of movies... just finished watching penelope. i thought it was really cute and her bedroom was total eye candy, not to mention her amazing dress! i def reccomend it for a cute quick flick. the day after i get back from chicago i'm heading to the king of prussia mall with rick, ryan, ian and some other people to see batman: the dark knight at the imax theater, should be fun, even though they are total crazies and want to hang out at the mall for like 4 hours before! haha.

i'm sure i'll have lots of lovely pictures when i come back!

so this is going to be a quicke, but i just had to share this business...

i know i'm not 15 anymore, but i just can't resist this song by metro station. so shameful! it's really the video that did it for me. the singer in the red pants and ninja shirt? i just want to pinch his little cheeks! haha. plus i've always been a sucker for a good dance movie and i guess that applies to videos too!

so, is anyone else out there thinking of going to the all points west festival at liberty state park? i just just heard about it on left of center. it's 3 days, the first weekend in august, and the line-up is pretty killer; css, duffy, mates of state, the duke spirit, radiohead, kings of leon, animal collective, metric, the roots, the virgins, sia, cat power, the secret machines, matt costa, de nova dahl, rogue wave and like 20 others. so, who's down? i have no idea if i'll do all 3 days or what, but in classic festival method, there are at least 2 or 2 bands i want to see each day so it would be really hard to pick just one! eek!

mucho fun in the sun! 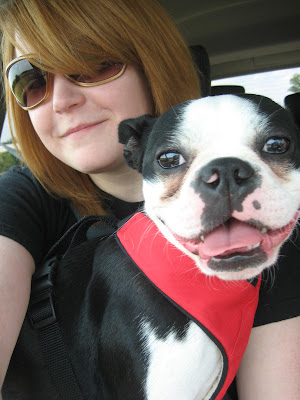 so, i spent wednesday night at nicole's enjoying a little impromptu surprise belated birthday celebration while scrapping (she made me my fave cupcakes, funfetti, and got me the cutest little mustard colored purse evs!) nicole of course got some major cute-ness finished and i kind of pushed things around forever and then gave up and pulled some different stuff out and banged out a cutie layout in about 30 minutes. love when that happens!

while i was at nicole's marykate called to see if i wanted to head down the shore the next afternoon for the 4th of july weekend. after a little mental inventory of what clothes i actually had clean i said "of course." so, after a little late night laundry i got some sleep and headed to meet mk at her house and we headed down. maggie rode on my lap the whole way down and mostly just slept.


we had a lot of fun. lots of reading, really awesome food, some beers, a couple of days out on the boat, some mini golf and TONS of fireworks. of course charlie had to set off the professional ones from the back deck and everyone along the lagoon had one type or a 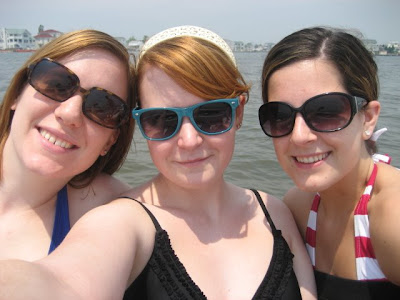 nother. we played a ton of "left, right or center" too! i totallly need to pick me up some of those dice! it's a really fun game to play, especially with a big group. you can play with $3 for a really long time, haha.


so here's a little list-y of things i've been doing, digging on and dieing over;


* rock band for wii- hello! i totally knew i was going to love this! i spent 6 hours singing all the songs at the too of my lungs the first full dya i had it. now to perfect those pesky drums! my highest score songs are def "i think i'm paranoid" by garbage, "say it ain't so" by weezer (that one was bound to happen, i've been singing along to it for 10 + years, haha) and "dani california" by the red hot chili peppers.


* "lamb: or the gospel according to biff, Christs childhood pal" by christopher moore - pure hilarity that is def not for the overly serious! i'll let you know if i still love it when i'm done!


* cute new bags - they're everywhere right now! what's up with that? total torture! i had another one in my hand last night and i just had to say no. i am loving my fossil one though and the bag switching is getting out of control!


* major etsy love - i haven't really been exploring etsy lately, but when i went on to get kristina's awesome mini kit i started doing some browsing and holy heck! i came pretty close to getting myself into some trouble! i got a couple of things though. obviously i needed this typewriter necklace from boygirlparty and i threw it's octopus counterpart in as well. then, while i was on the necklace kick i grabbed this cute bird on a swing! eek! so cute! pluse the custom wallet and business card holders i'll be receiving from dear sukie any day now. seriously though, how could i pass up a wallet made with that beloved sassafras lass dear paper? there was no way! i'll have to blog about the other items i'm lusting after someday soon!


* cha - i've been mentally packing for about a week now, haha. that's not saying that i won't find some things i "need" when i'm in philly tommorow getting my hair did, but y'know. i bought some more travel toiletries yesterday at target. that travel aisle is totally evil! i always end up buying things i will never need because they are cute and tiny! and has anyone else noticed the total lack of peaks this year? i've seen american crafts, pink paislee and a couple of other really tiny peaks, but where are my precious basic grey, hambly and sassafras? the suspense is killing me! also, i have been wondering about a SIS meetup for forever, so i just checked with jj and picked a place and set a date & time, haha. someone had to take the reigns, right?


alright, i'm off to work on my class sample for august. it's one of those projects that i'm so excited about that i just can't seem to really get it done! there is too much pressure with all the cuteness involved! i'm using the prima acrylic build-a-book and the sass "sunshine lollipop" collections with touches of thickers, hambly, bling and bunches of bling!