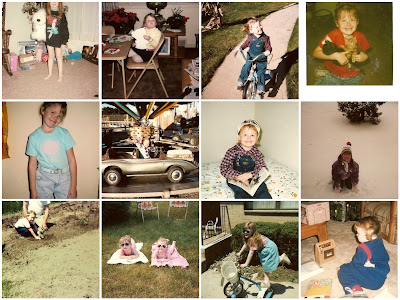 say hello to little morgan, haha. i'm working on an 80's kid mini album using the sassafras "happy place" collection and it was pretty hilarious going through all the old pictures of myself. these here are some of my favorites (i left out the naked bathtub pic where i'm playing with all my snorks, mr. men, little miss', hello kitty and care bears figurines on the side of the bath tub). it's so funny to see what a totally weird kid i was, haha. but, there are defenitly some faces in these pictures that i still pop and i can see where a lot of my little personality developed. it's like totally radical!!! haha.

kristina (who is an awesome friend for many reasons, the lesser of which is her willingness to travel through the city to come to new jersey at ungodly hours in the morning) came to visit thursday to saturday. we took the train into philly thursday morning to get my hair did, which took way longer than it should have, and then we spent the rest of the day and evening people watching in the park, taking photos (which you may see later), sharing beers, a little bit of shopping and meeting up with my friend ashley and her mister, simon, at a really cute bar called apothecary that serves old-timey cocktails with like a million ingredients. k also came to work with me on friday which was followed by chinese food and a mini movie fest (baby mama - nay, iron man - yay) and then a slow day about town(s) saturday. all in all a relaxing little weekend.
the spoils of said day about town on saturday include the october 2008 issue of "print" magazine which is filled with yummy articles like; "pushing the envelope: an unusual treasure trove of letterheads", "kill your darlings: book designers' favorite covers that didn't see the light of day" and "breaking the news: designing tv's political satire" not to mention all the ridiculous eye candy/inspiration to be found in the press packets, package design and event art. so yum. anyway, i also got conor oberst's self titled & jenny lewis' new album "acid tongue". usually i'm a downloader of tracks, but with artists like these who i know i love i usually buy the actual album because i love to have them in my hands. i am really loving the new conor oberst, but i have to say i'm kind of dissapointed with the new jenny album. maybe i just need to give it a re-listen in a little while, but as of now all it's doing is making me want to listen to the previous albums. what has everyone else been thinking of it?
other than all the above i've just been ticking things off my long list of scrappy to-do's. i made a little mini of my pictures from our little daytrip to sea bright using the new crazy thick acrylic atc sized album from maya road, a ton of the new "urban prairie" line, new hambly & mini faux-laroids. i just took some pictures so i'll share soon. other than that i've been making lots of card kits for the store, working on class samples and getting back into a scrappy kind of upswing, which is a nice place to be. i've been spending a TON of time getting donations and planning for the crop too. i can't believe how close it's getting, november 1st really isn't seeming so far away anymore! like at all!!!
well, i'm off to work, i'll leave you with the lyrics to one of my favorite sing-a-long bits from a tilly & the wall song called, "the ice storm, big gust, and you." it's become my kind of mantra for lightening up that heavy boots feeling and energizing myself to just deal with things. ---
"we will sing pretty songs about love, and we will fight if that's what it takes, and we won't back down. no we won't shut our eyes and go to sleep. we will write all over your walls, and we will dance to no music at all. we will do what it takes to get through to you. no, we won't back down. no, we won't shut our eyes and go to sleep!"

okay, if anyone who lives in or around tennesee ever sees caleb followill (singer/guitarist) please let him know i would like to smooch his face! kings of leon always put out those albums that you can listen to all the way through without skipping a single song, but their newest, "only by the night" is the most addictive so far, although it is a tight race between their newest and "aha shake heartbreak". anyway, i've been listening to it pretty much non-stop since the day it came out and i had to share "use somebody" which is one of my favorites, and let you all know that even though he is rockin' some sort of crazy cut off sleeves i still totally love this dude.

and p.s. here's a quasi-random list of more albums that have come out in the past year that everyone needs to give a little try;

06. "keep your eyes ahead" by the helio sequence (check out "love & distance" while you're at it)

new essentials for the autumn transition coming soon! as for now, i'm off to work on card kits for the store. 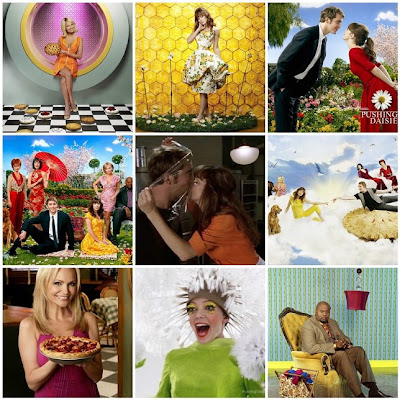 i know i posted previously about being psyched for "pushing daisies" to begin, but tonight's season premiere night! eek! i only know a few people who watch it, but all of us who do love it like craaaaazy! y'all might know that i'm really not the romantic, mooshy squishy kind of girl, but this show is the perfect combination of quirkiness, gorgeous sets & costumes, adorable characters, sarcasm, inspiration on par with moulin rouge & crazy adorable love story that i actually care about! i always want to scrap afterwards and after making that little mosaic up there with pictures from flickr i want to scrap now!
here's my top 5 fave things about "pushing daisies";
01. the way ned & chuck hold hands (since they can't touch or she would be dead again)
02. when olive snook breaks out into song
03. chuck's adorable outfits
04. the awesome guest stars (joel mchale, molly shannon, paul reubens)
05. crazy inspiration; sets, colors, character names, cinematography: it's all totally fabulous